Soren Aabye Kierkegaard lived at a time when the proofs of Christianity were debated in universities. Miracles were questioned by philosophers and theologians responded to their questions. Books were written on one side and the other and libraries were filled. Kierkegaard was firmly  against the over use of external proofs and advocated the testimony of the inner voice instead.

He wrote over 80 upbuilding-edifying discourses and a few pseudonymous books. The pseudonymous books seem to have gotten all the attention. He wanted to write works that would make people think and build them up rather than tear them down. He reached the goal of the discourses in his 1847 book Works of Love.

Let us follow after the things which make for peace, and things wherewith one may edify another. Romans 14:19 KJV
But love builds up. 1 Corinthians 8.1
Let all things be done unto edifying.  1 Corinthians 14:26 KJV

There is nothing, nothing at all, that cannot be done or said in such a way that it becomes upbuilding, but whatever it  is, if it  is upbuilding, then love is present. Thus the admonition, just where love itself admits the difficulty of giving a specific rule, say, “Do everything for upbuilding.” Romans 14:19 It could just as well have said, “Do everything in love,” and it would have said the very same thing. One person can do exactly the opposite-in love-the opposite becomes upbuilding. There is no word in the language that in itself is upbuilding, and there is no word in the language that cannot be said in an upbuilding way and become upbuilding if love is present.

Thus it is so very far from being that case that the upbuilding would be something  that is an excellence for a few gifted individuals, similar to brains, literary talent, beauty, and the like (alas, this is just an unloving and divisive error!) that on the contrary it is the very opposite- every human being by his life, by his conduct, by his behavior in everyday affairs, by his association with his peers, by his words, his remarks, should and could build up and would do it if love were really present in him.
Soren Kierkegaard, Works of Love 1847, Hong p. p. 212-213

a. To Need God is a Human Being’s Highest Perfection.
b. The Thorn in the Flesh.
c. Against Cowardliness.

You can read the first of Kierkegaard’s four discourses here in  Swenson’s translation. I found it interesting.

Kierkegaard has been turning his readers from the external world to the inner beauty of the world of the spirit. The Romantics had deified Nature while the Idealists deified both Reason and the State. Kierkegaard was against this kind of upbuilding of external goods and pushed for the inner goods.

About faith there is a different kind of talk. It is said to be the highest good, the most beautiful;, the most precious, the most blessed riches of all, not to be compared with anything else, incapable of being replaced. Is it distinguished from the other good things, then, by being the highest but otherwise of the same kind as they are-transient and capricious, bestowed only upon the chosen few, rarely for the whole of life? If this were so, then it certainly would be inexplicable that in these sacred places it is always faith and faith alone that is spoken of, that it is eulogized and celebrated again and again. Soren Kierkegaard, Eighteen Upbuilding Discourses, Hong p. 9-10 – The Expectancy of Faith

He started with faith and moved on to other internal goods, such as, endurance, patience, love, peace, and joy.

He pictured the divided self in Either/Or – A wanted to become a religious individual and so did B but they argued about “how” to become one. The little discourse at the end has Christ telling them to make peace with one another. We first become “at one” with ourselves and then we can made a “decisive resolution”.

When a person turns and faces himself in order to understand himself, he steps, as it were, in the way of that first self, halts that which was turned outward in hankering for and seeking after the surrounding world that is its object, and summons it back from the external. In order to prompt the first self to this withdrawal, the deeper self lets the surrounding world remain what it is-remain dubious.

This is indeed the way it is; the world around us is inconstant and can be changed into the opposite at any moment, and there is not one person who can force this change by his own might or by the conjuration of his wish.

The deeper self now shapes the deceitful flexibility of the surrounding world in such a way that it is no longer attractive to the first self. Then the first self either must proceed to kill the deeper self, to render it forgotten, whereby the whole matter is given up; or it must admit that the deeper self is right, because to want to predicate constancy of something that continually changes is indeed a contradiction, and as soon as one confesses that it changes, it can of course, change in that same moment.

However much that first self shrinks from this, there is no wordsmith so ingenious or no thought-twister so wily that he can invalidate the deeper self’s eternal claim. There is only one way out, and that is to silence the deeper self by letting the roar of inconstancy drown it out.

If any of you lack wisdom, let him ask of God, that giveth to all men liberally, and upbraideth not; and it shall be given him. But let him ask in faith, nothing wavering. For he that wavereth is like a wave of the sea driven with the wind and tossed. For let not that man think that he shall receive any thing of the Lord. A double minded man is unstable in all his ways. James 1:5-8

When the first self submits to the deeper self, they are reconciled and walk on together. p. 316

Kierkegaard liked the Epistle of James.

When, for example, someone who has been tempted by worldly prestige conquers himself so that he no longer reaches out for it; when someone who feared life’s dangers drives out his fears to such an extent that he now longer flees the dangers; when someone who has lost his bold confidence overcomes himself to the point that he stands his ground and does not retreat from the place of decision-then we shall not depreciate this but praise him instead.

But if he will take care not to save his soul in new vanity and drive out the devil with the devil’s help, (Mt 12.24, Mk 3.22-23) then he will definitely admit that in his innermost being he is not able to overcome himself.

But he by no means understands this as if evil had once and for all gained power over him-no, but he is able to do only so much, and this only by extreme effort, in resisting himself, but this, of course, is not overcoming himself. In other words, he creates in his innermost being temptations of glory and temptations of fear and temptations of despondency, of pride and of defiance and of sensuality greater than those he meets in the external world, and this is the very reason he struggled with himself.

Otherwise, he struggles with a fortuitous degree of temptation, and the victory proves nothing with regard to what he would be able to do in a greater temptation. If he is victorious in the temptation with which the surrounding world confronts him, this does not prove that he would be victorious if the temptation were as terrible as he is able to imagine it, but not until it appears that immense does he actually learn to know himself. It now appears that immense to him in his inner being, and this is why he knows himself-something that he perhaps would not come to know in the world-that he is capable of nothing at all. p. 319-320

We need God to overcome ourselves. What does it mean to struggle in prayer? 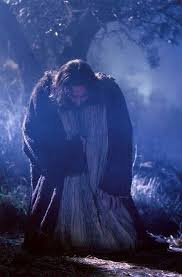